Young drivers between 18 and 24, especially males, are much more often involved in accidents in comparison to drivers of other age groups. This is one of the most consistently observed phenomena in traffic throughout the world. Young drivers are also the least experienced. The reason for the high involvement of young drivers in vehicle accidents is not clear, even when exposure to risk is controlled for. While young people from 16 to 24 years of age represent 17% of the Canadian population, they account for 58% of all driver fatalities in Canada! 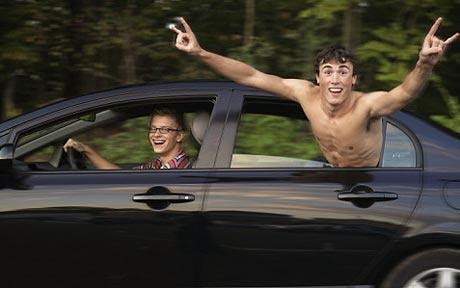 Poorer risk perception is often proposed as the cause for the high accident involvement of young driver. It has been stated that, even though young drivers may perceive as much risk while driving as older drivers and thus do not deliberately seek more risk, they may be more confident in their ability to avoid an accident.
In a number of studies, young drivers gave lower ratings of accident risk for driving situations which demanded fast reflexes or substantial vehicle handling skills. They rated their own risk of an accident and driving abilities as being the same as for older drivers. However, they saw their peers as being significantly more at risk and as having poorer abilities than themselves. The data suggested that risk perception is strongly related to perceived ability. In another study it was found that drivers with three years of experience judged themselves to have better driving skills compared to other drivers. The drivers who gave the highest ratings on skill also reported faster driving.

In another line or research, the high accident involvement rate of especially young male drivers has been associated with the use of alcohol and drugs as a lifestyle-related phenomenon. Although as many as 50% of fatally injured young drivers have been found to be positive for alcohol, this is slightly lower than the frequency for older drivers. Also, it has become clear from surveys that drinking and driving is widespread among younger drivers although they had typically consumed less alcohol than older drivers. In alcohol related crashes younger drivers tend to have lower BACs than older drivers. Yet, the high accident involvement among young drivers has been attributed to risky driving behaviour as an aspect of adolescent lifestyle that is embedded in the same set of personality and behaviour aspects as other kinds of adolescent problem behaviour such as delinquency, problem drinking and illegal drug use and smoking. Some authors believe that the high accident involvement of young, and especially male, drivers is a lifestyle related phenomenon resulting in a higher deliberate risk acceptance or higher target level of risk. But in that case it would be expected that a higher percentage of accident involved young drivers are positive on alcohol and have higher BAC levels compared to older drivers. This obviously is not the case.


It has frequently been reported that the relative risk of becoming involved in a fatal accident rises faster as a function of BAC level for younger drivers compared to older drivers. In other words, with increases in the amount of alcohol consumed, the accident risk increases for all age groups, but much more rapidly for the young. Although the reason for the interaction between age and BAC level on accident involvement is not clear, it suggests that both factors share a common locus of effect, in the sense that the factor that causes the higher accident rate of young drivers is aggravated by alcohol. In the discussion of the effects of alcohol it was suggested that the lack of compensation for impaired performance may be the cause for the large role of alcohol in accident causation. Evidence was presented that drivers are unaware of performance decrements under alcohol which is possibly the cause for the absence of compensatory speed changes and effort. From the same perspective it may be suggested that young and inexperienced drivers have not yet learned to recognize the effects of situational factors on their performance and thus fail to compensate for these effects resulting in speeds that are too high for the circumstances. Extensive practice on relevant driving tasks can be improved in driver training and a driving simulator can be a useful tool to accomplish that.

Other examples of traffic psychological theories and models can be found here.


More details on the accident risk of young drivers and how to use a car driving simulator can be found here.
Posted by DriverSafety at 04:32